Glowing: A Reproduction Production is “a love story born of blood, sweat and vomit”. And who’s going to argue with a review like that?! 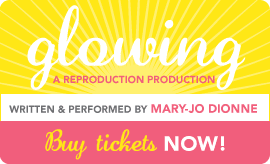 A finalist for Vancouver’s Funniest New Female Comedian and Vancouver’s Funniest Person with a Day Job, Mary-Jo’s small handful of years dabbling in stand-up comedy coupled with over 15 years as a professional writer lead her to write, produce, and perform in her debut one-woman show. Glowing: A Reproduction Production, which chronicles her rocky road to motherhood, opened at the Vancouver Fringe Festival in 2013 – to nightly standing ovations – and went on to a successful run at the Winnipeg Fringe Festival in 2014. She is currently planning a summer 2019 tour on both coasts of Canada. SOLD OUT Deep Cove, North Vancouver, BC — June 25th, 2019
Wolfville, Nova Scotia — July 4th, 2019 BUY TICKETS Mary-Jo trained as a writer and a performer at the American Comedy Institute in New York City under the direction of Stephen Rosenfield who the NYTimes calls “the best known comedy teacher in the country”, and at the Humber College School of Comedy with instructors like Jerry Stiller and Ann Meara, SCTV alum Joe Flarety, former Saturday Night Live writer Robin Duke. She has performed stand up in New York, Toronto, LA, and Vancouver. Trailer Winnipeg Free Press Interview

Kristina Matisic,
TV Executive and Personality
as seen on the Oprah Winfrey Network

An honest account of arriving at motherhood. I fell head over heels for the writer/performer.

(The audience) sprung to their feet as soon as the show finished. (It) is well written, emotional, authentic, delivered with expert timing and funny.

Funny, moving, and intimate, Mary-Jo’s storytelling is infused with warmth and wit. From adoption fails and fertility woes to morning sickness and hormonally charged revelations, Glowing is an artfully conceived comedic romp.

I absolutely adored it! She is warm, funny, and engaging. I actually did laugh and cry…

If you want to connect, shoot Mary-Jo an email. She’ll hit “reply” just as soon as she’s back from Mommy and Me Ballet.

Work history, education, training, and — ahem — accolades, it’s all here. (The only thing that isn’t, is what Mary-Jo had for dinner last night.) (Tofu and broccoli on brown rice.)

Confidence by the foot

The Millipede Project is committed to getting 500 Vancouver-area kids-in-need into a new pair of shoes every year. And your donation of $30 (or more, of course!) means a child gets new kicks — and you get a tax receipt. Buy a child a pair of shoes now.

Tea with a Titan is a series during which Mary-Jo speaks with those people who have one thing in common: The ability to provide a perspective shift, despite the obstacles.